Real-time lighting character system aims to improve upon the look of the standard avatars by augmenting skin and eye materials. While the standard avatar may be exceptionally pleasing to the eyes when equipped with PBR materials under image based lighting, it may also lack the same visual spark when put under a non-PBR environment. RTL Character System aims to fix this deficiency with a few clever tweaks to key areas of the avatar. With some practice, you may also adopt some of these techniques to enhance your own set of characters for the traditional lighting model.

RTL eyes tend to possess more liveliness under the legacy lighting setup. PBR eyes can seem dead when no IBL is present in the scene while RTL can still glitter with a minimal light setup.

RTL skin shaders come loaded with a glow map that is a direct duplicate of the Base Color/Diffuse map. By default the effect is turned off, but with a simple adjustment in the Glow Strength settings, one can quickly notice a warming of the skin material. Even a tiny increment of 3% is enough to create a look of fake sub-surface scattering effect.

The skin material has the following differences: 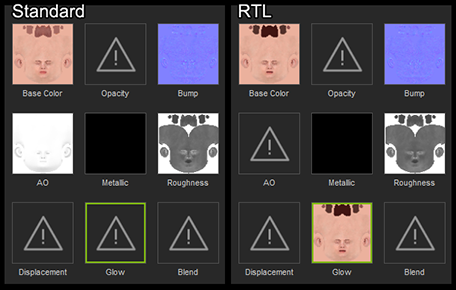 The eye material has the following differences:

The cornea traditional material has the following differences:

The following tutorial introduces six of Reallusion’s new Elite Range of characters, and describes their specific optimizations for real time lighting. In addition to demonstrating the new characters and their features, the following video also covers a number of fundamental topics including preparing base models, Real Time lighting/shadow settings, texture settings as well as using Character Creator’s powerful content preset approach. It finishes off by demonstrating the latest avatars in iClone.