The center point of a long object will be placed close to one end for easy rotational adjustments, such as eyebrows and long hair pieces. The ears will be placed at the sides of the face near the center line with the pivot for the eyes aligned with the pupils. The face sides should be placed below the jaw line matching or near the Head Bone point. The Bone point is a one-time settings, so it is urgent to get the settings just right before turning the head. Otherwise, modifications to the Bone point will require modifications to the subsequent head-turn settings and expressions.

This setting will let the character turn his/her head while the neck bends according to expectation.

Left and right facial part image switching (like the nose) is designated by the various turning angles in Photoshop. You can download the basic PSD structure template here. The silhouette for the sides of the face is not constructed from switching images, rather it is composited together from various elements which should be placed under the Center category. You should place the images in the lowest level directory of each category. For example, inside Center > Nose > Normal instead of just Center > Nose or Center. If placed, say in the Center > Nose folder, the element may appear inside the Composer but will become invisible in the Stage. 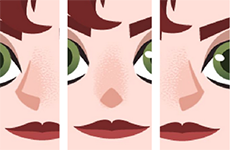 In order to make the head turn believable, you can place different images for different angles of the face. Then composite it with facial elements to simulate a complete head turn to the side.

You can save some time by creating one side first (either the left or right) for the face turn and mirroring that over to create the opposite side. Some parts such as the eyes, eyebrows and ears have left and right configurations. You can also designate complementary parts using the Pairing Settings under Mirror Options.

Keep in mind that child and parent names should match. For example, FrontHair3 should be placed underneath FrontHair and not Backhair. Non-matching names will cause the items to not adopt the movement settings. Size of the PSD graphical elements should also be relatively the same as those in the Cartoon Animator. When the size differences are too great, the movement range will differ significantly when the head turns. If you are unsure of the look for the 45 degree head turn, then it is best to first create the 0 and 90 degree head turn composition. This makes easier to infer the look for the 45 degree head turn and inform you on the facial feature positions and sizes. You can then save the file to preview the head turn and make adjustments to the facial features as needed.

If you are creating a character in the style of an embedded character, then it is recommended that you first create the quarter view (45 degrees). After you save the foundational settings for the head turn you can process the front view (0 degrees) and the side view (90 degrees). Front and quarter view upward and downward tilt will require the adjustment of facial features and changes to the shape of the face. For the side view, simple head rotation for upward and downward tilt should be sufficient.

Following the steps above, you'll get results that resemble the following in corresponding order.

After the head is turned, the items that must be placed behind the neck, such as the back, are to be moved to the back of the body. Then move the entire head layer over the body.

For setting the head turn towards the back, make sure that the eyes and nose become compressed. The nose should be moved behind the head and only a slight edge of the mouth is revealed. After copying to the upper and lower cells, rotate to adjust the up and down angles of the head. 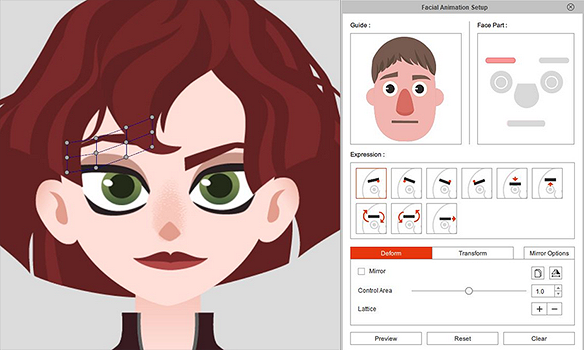 Please follow the example animation on the left side of the UI to set the amount of displacement for each part of the different parts. The degree of exaggeration is different depending on the character style. Please set it according to your preference. There are several items such as the inclination of the eyebrows, the shape of the eyes, the range of movement of the pupils up and down, the amount of twisting of the nose, and the deformation of the mouth.

Part of the eyes and mouth can choose to use Smooth Mode depending on the role. Different from the preset use of eye-changing/mouth type, Smooth Mode is a combination of multi-object combination, such as the combination of the upper lip of the mouth, the lower lip and the oral cavity into a nutcracker. Note that after clicking the Smooth Mode, you cannot restore the mode to the original map. Please make sure you need to click again.

After the character PSD is imported, you can see if there is any object on the face that disappears/display error, and then re-import after changing from PS. If the character you are making has a three-angle body, use the same front head to copy the body to other angles to make the head turn settings.

Then check the parts of the body that have not been cut, and then use the Bone Editor to adjust the Expand to the maximum.

For the joint alignment, you can draw a vector full circle with the same curvature in the PSD, using the wrist as an example. The joints on both sides are aligned with this circle. PSD into the AP will automatically ignore the vector file, can be retained. Change the gesture to pay attention to whether each gesture has a vector circle for reference.

It is recommended that if you want to place a new angle graphic, you can put the outer opening, front, inner eight, and positive side feet from top to bottom.

When making a new character skeleton, be aware that the three points of Thigh/Shin/Foot should be arranged in a non-linear manner to be able to manually operate the character. There is a slight difference in value (1pixel). If it is a straight line, the action character will go to either side. An angled situation will be fixed to the left and right.

Unless necessary, such as the shape of the foot of the shoe, the distance between the ankle and the sole (Foot/Foot2) should not be too far away. If it is too far, it will easily cause the deformation of the skeleton of the operating foot skeleton when the Lock toe is moved.

Take the right hand as an example, with 30 gestures on one side and mirror shots on the left hand. Note that gestures have back and under side differences.