Auto Hide Model Polygons or AHMP is a technology used by Character Creator to dynamically hide mesh faces when Cloth is worn.

Special thanks to Vitaly Prudnikov (Vit3D).

Cloth that is worn on the character should perfectly cover the body under the ideal circumstances. However, sometimes mesh penetration may occur when the cloth is contracted to the body shape or when the figure is in motion. Auto Hide Model Polygons tool (AHMP) can be used to define the polygons that become automatically hidden when the cloth is worn on the body and the clothing underneath. AHMP settings are directly saved on the cloth asset itself. AHMP is achieved by two methods: the Skin Hiding Groups and the Cloth to Cloth Hiding Groups. The cloth groups do not affect the skin group and will be described in detail in the later sections.

In order to use AHMP correct, you must first set up the cloth collision layer ordering, see Collision Layer Assignments. 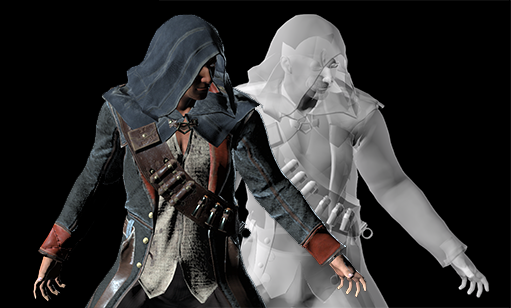 AHMP is a plug-in for CC. The settings for AHMP is shared with other codes, so everytime you update CC you must also download the AHMP file to match the updated version of CC. In order to do this: 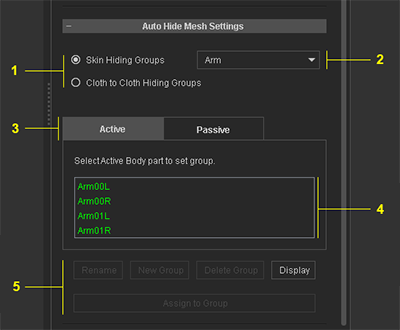 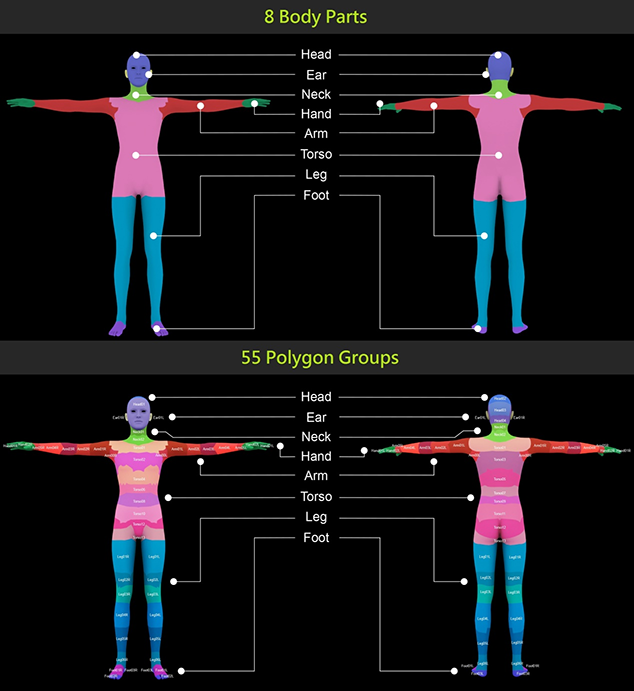 Assignment of the Cloth Active groups directly affect the visibility of the polygons of the body. As soon as the cloth is applied, the corresponding polygons in the body mesh will become hidden. Active groups not only affect the skin but the also all the cloth layers underneath that have the same group name assignments.

Assignment of the Cloth Passive groups have no direct effect on the visibility of the polygons of the body or the cloth model itself. This type of assignment just marks the faces as a potential candidate for hiding when a cloth of the same Active group is layered on top.

When you define the skin polygon groups for hiding, in fact, you are making some sort of link between the faces in the cloth and the corresponding polygon groups in the body.

The body polygon groups are numbered from 1 to 5. Parts of two layers of cloth meshes above are set to passive depending on whether or not they cross into the body polygon group regions but are not, by default, counted as belonging to those regions.

In order to define the skin polygon groups:

Reallusion made CC content also utilize the same body polygon groups. If developers follow the rules set out in this guide, then the custom and Reallusion made clothes can be properly mixed and matched.

The main difference between Skin Hiding Groups and Cloth to Cloth Hiding Groups is the fact that cloth groups have no effect on the body mesh. This can be useful if the character has several layers of clothing that belong to the same type of collection. Other than this, the cloth groups work the same way as the skin groups. There are also no limitations on the defined cloth groups in terms of polycount and cloth group names. However for it to work properly with other clothing of the same collection, you should keep the group names consistent for matching visibility settings.

If you like to create clothing that is fully compatible with other existing standard collections in the Content Store and the Marketplace such as CC Essential Clothing & Fabric and Professional Outfits, it's recommended that you examine the clothing models in these packs and find out what cloth group names are being used. If the cloth groups fit the configurations of the your clothing then you can apply those same names to your cloth models.

To create the cloth groups:

You can also create empty cloth groups by not selecting any polygons in its assignment. This can be useful for hiding the entire cloth model below that have the same group assignment. For example, you can have an underwear model with the cloth group of "Briefs" with all of its polygons included, then you have a pants model which should completely cover and hide the underwear mesh when it is worn. In this case, you can create a "Briefs" active cloth group on the pants with no polygons assigned to the group and everything should work as expected.

In most cases, cloth groups should be defined as Active while the Passive definition can be useful for interactivity with other cloth layers.

In the examples below we study the AHMP settings for the cloth content that come with CC by default.

You may have noticed that in the examples above, the tank top has become invisible. This is because both tank top and the shirt models, besides having the same skin groups, also have Cloth to Cloth group definitions. 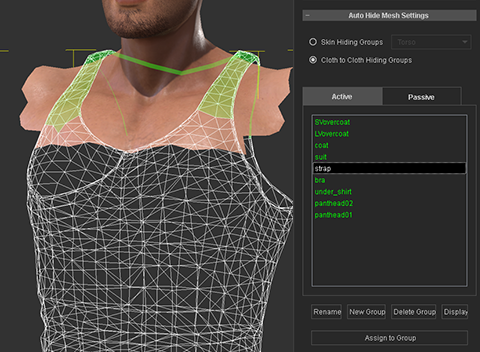 When the shirt and tank top are combined, the polygons assigned to strap group become hidden but has no effect on the skin beneath.

You can find much more AHMP usage examples by examining Reallusion made CC cloth content.